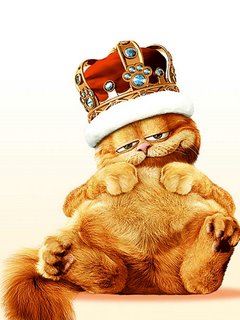 A WISE guy of a friend once told me, “How would you feel if I told you I don’t like Calvin and Hobbes?” I almost choked. As words failed me, staring incredulously was all I could do. The wise guy goes on: “That’s how I feel when you keep telling me you don’t like Garfield.” Oops, the secret is out! Non-Garfield worshiper in the house. But seriously, how can you compare Garfield with Calvin and Hobbes ? Before this comic argument assumes Asterix vs Tintin proportions (we all know Asterix is far better), let us turn to Garfield 2 , the movie.

When they decided to make another of those comic strips into a live action movie two years ago, fans would have groaned. How could they get a cat actor that looks anything like the greediest cat in the world?

The makers went in for CGI, and bad CGI at that, too. But largely due to the vocal talents of Bill Murray in the title role, the movie made enough money to warrant a sequel. Groan! The incredibly dumb Jon (played with utmost boredom by Breckin Meyer) decides to follow his girlfriend Liz (the cute Hewitt trying to look too cute and ending up as not) to London. Garfield, and that insult to caninedom, Odie, hide in the baggage. In the Queens land, Prince (Tim Curry), the pet of a late insanely rich lady, inherits her entire estate.

The evil nephew Lord Dargis (Billy Connolly doing a terrible version of John Cleese) wants Prince to meet the God of Cats as soon as possible so he can get the moolah. Garfield and Prince accidentally switch places. And the movie drags along as only one with two terribly fat cats can.

Bill Murray tries his best to keep this madhouse afloat, but even he sounds bored. It doesn’t help when his co-actors together cook up the blandest possible dish.

None of comic creator Jim Davis’ acerbic wit (you have to give credit where its due) is on display.