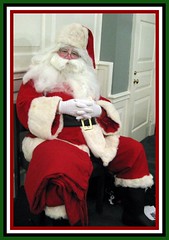 Originating from Western culture, where the holiday is characterized by the exchange of gifts among friends and family members, some of the gifts are attributed to a character called Santa Claus also known as Father Christmas or Saint Nicholas . The popular image of Santa Claus was created by the German-American cartoonist Thomas Nast (1840-1902), who drew a new image annually, beginning in 1863. By the 1880s, Nast’s Santa had evolved into the form we now recognize. The image was standardized by advertisers in the 1920s.

St Nicholas was born in 271 AD and died around December 6, 342 or 343 AD near the Asia Minor (Turkey) town of Myra where he later became Bishop. He performed many good deeds and was a friend to the poor and helpless, and upon his death, myths soon sprang up about him all around the Mediterranean Sea. He was reputed to be able to calm the raging seas, rescue desperate sailors, help the poor and downtrodden, and save children. He was soon named as the patron saint of sailors.

n anticipation of St. Nicholas’ nightly visits, children in several European countries put their shoes in front of the fireplace. They sing traditional songs and provide a carrot or hay for the horse. At night Black Pete puts gifts and candy in the shoes.

The true story of Santa Claus begins with Nicholas, who was born during the third century in the village of Patara. At the time the area was Greek and is now on the southern coast of Turkey. His wealthy parents, who raised him to be a devout Christian, died in an epidemic while Nicholas was still young. Obeying Jesus’ words to ‘sell what you own and give the money to the poor,’ Nicholas used his whole inheritance to assist the needy, the sick, and the suffering. He dedicated his life to serving God and was made Bishop of Myra while still a young man. Bishop Nicholas became known throughout the land for his generosity to the those in need, his love for children, and his concern for sailors and ships.