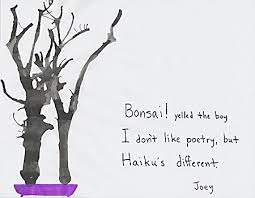 Off late, I have stumbled upon something called a ‘haiku’, and Ive been quite fascinated, I should say.An ancient art form, known for its brevity and up to the point illumination, it is an aesthetic and beautiful way of capturing your ‘aha’ moment. So what exactly is it?

Haiku is a poetic art form which has become popular in the 20th and 21st centuries. Its appeal lies in the crisp but lovely rendition of a moment, a meaningful potrayal in a chaotic and rushed world. Closely tied to the Japanese aesthetic of ‘Yugen’ and the spirituality of buddhism,a haiku looks deceptively simple, yet may take years to master. It is basically a 3 line depiction of  telling moments, in a 17 syllable form. This is generally broken up into three lines of 5-7-5 syllables correspondingly.
Here is an example from one of the great masters of Haiku, Basho (1644-94)
An old pond..
a frog leaps in
the waters sound
And another one by Basho too:
Temple bells die out.
The fragrant blossoms remain.
A Perfect evening!
Traditional Haiku-s have a lot of inherent intricacies, like using something called ‘kigo’ that is a word which contains an image of the current season. A lot of importance was given to seasonal imagery in the Japanese format, but in the other languages,especially English the use of non-natural images common to modern life is allowed.
To end it up, here’s a haiku I wrote in chemistry class:
sitting in lectures,
heights of insipidity
catching up lost sleep.
P.S. : I did not imply anything with the haiku, it was my first try.

A poem, titled : “The view of the morning”

Hi! My name is Sailendra, and I’m a first year student in MIT, CSE Dept. I’m an amateur poet, and I wanted to contribute a bit to this blog, and publish some of the stuff […]

Tips on Dating This Valentine’s Day

Well, after those mushy letters & covert gestures, she is that sweet looking, candy eyed girl who makes you go weak in the knees. But looks can be deceptive. So you decide to take her […]

I’m staring at a blank canvas right now, ready to be painted, in all its seemingly beautiful colours. As an outcome of my transfixed gaze, appears the quintessential question.. which colour should I choose? my […]