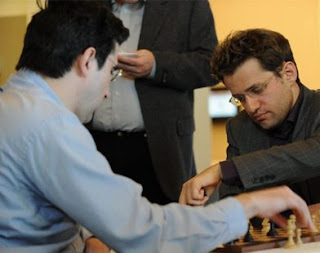 In the land of the blind at the Melody Amber tournament in Monaco, one man is king: Levon Aronian! His total mastery of the blindfold tournament (undefeated on 8.5/11 – the first player in the history of the tournament to be undefeated blindfold!) proved to play a major contribution in the world No.3 taking clear first place in the overall standings on 15.5/22, a full point clear of Magnus Carlsen, with World champion Vishy Anand trailing in third place.

Although Carlsen scored badly this year in the blindfold, he more than made up for it in the rapid tournament by dominating it in much the same way as his rival did in the blindfold, as the young Norwegian superstar took that title with a record winning score of 9.5/11. And with the final results being as it was with Aronian and Carlsen (and Anand third), it is perhaps no co-incidence that they are both talked up frequently now as being the best world championship challengers from a growing newer generation in the game – and possible world championship rivals themselves in the future!

Diary of an Atheist…..

Have you ever day dreamed? I do it all the time, in fact, I have PhD degree in day dreaming. And because of that PhD degree, I have a very hard time concentrating on my […]

Who Will Challenge Vishwanathan Anand next year? The world title candidates semi-final in Kazan (the capital of Tartarstan) ended with a bizarre shoot-out that saw the G-men of Alexander Grischuk and Boris Gelfand making it […]

Girl’s Will you be there?? Welcomgroup Graduate School of Hotel Administration (WGSHA) will be organizing the Manipal University Inter collegiate Body Building Competition for Men on 4th March, 2011. The details of the Competition are […]