What's new here?
I just read up on those cops / wannabe cops / making students pay Rs 200 just for fun.  Forcing students to cough up money after threatening them of arrests / forcing court cases / basically just harassment of which this country’s legal system is known pretty damn well for.for the occasional student to turn up / sit and make him cough out 200.  How many students would their be in a night? 4? 8? Maybe.  I don’t think there would be many more.  Maybe I’m wrong. 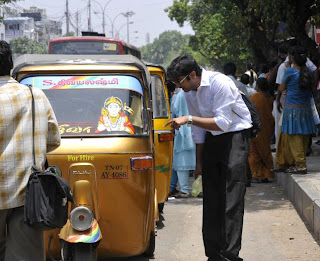 But we’re forgetting what happens in broad daylight at ALL hours of the day in Manipal (ONLY in MANIPAL : I’m not counting Delhi here, Surrounding areas).  The auto rickshaw drivers are the biggest crooks around.  Increasing the fare for the ride whenever they feel like it.  Why? Because they know they can and that the students have no choice.
The biggest communist presence in this town.  These guys are rude, expensive come in groups (like everyone else), mostly don’t care much, except how much money to make off you.  Especially if you’re an NRI, look like it and even more sound like it.
Harvard should do study on them like they did for the Tiffin Guys of Bombay. They are the emperors’ of town, the government who regulates their own prices.  No one questions them.
The rates change at different times of the day.  After 8 or 9 or 10 (depends on the driver) the rates jump 50% extra as it’s “night time”, after 10  – 11 it’s 200% of normal or more (usually more).  Come out of Blue Waters at night, a 2 km journey will cost you no less then 200 on most nights.  They have meter’s but don’t use them. Reasoning? Fuel prices have gone up so we have to increase.  Distance to go from Manipal to Udupi is about 6 km, which costs around the 70 – 80 rupee range, the same distance for Auto’s in Mangalore would be 50 or less.  It’s actually becoming unaffordable for most students to use them.
I’ve seen them yell at students, because they know they can.  Charging ridiculous prices all the time.  But by far the ones that are near the railway station are the best.  They know that there isn’t another stand anywhere.  They know that people have luggage, as such they know that they don’t have any other choice.  Charging any price they want, and refusing outright to go if you’re travelling too near for them.  Capitalists and Communists all in one.
Fare is Rs 20 starting? Udupi a bigger town 4 km to one side has Rs 17 starting.  An Mangalore has what Rs 13 still?  Biggest thing BOTH of those towns run on the meter. You pay exactly the fare what shows up on the meter.  Not more.  You know what you’re paying.  To go from Manipal to Udupi is Rs 80.  Are you bloody kidding me?  Even if I take into account the rise in fuel costs, the rise in food prices with what you drive and the fact that most of them mix kerosene in their fuel anyway that is blatant robbery. You get I guarantee at LEAST 25 – 30 km / liter in those shit boxes.  One liter of fuel is Rs 64.  The distance to Udupi is 6 km.  You get at least 4 trips to Udupi.  Which is about a Rs 256 profit in 4 trips.  Most of the trips that you charge Rs 20 minimum base fare are less then 1 km in distance.  I would say easy 70% of your trips are within Manipal.
Then your evening rates (50% extra) and your night rates (200%).  A friend of mine got into an auto as is was raining pretty bad, went about no more then 50 METERS and was forced to shell out Rs 40, this after arguing as the driver wanted Rs 60.  For 50 meters.  If this isn’t enough of a robbery what is? 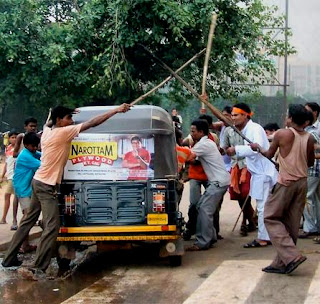 Oh yea there is something almost as bad.  The restaurants. Eating out has literally become a once in a while thing as even the places that serve snacks are charging exorbitant prices as they know the students that fill this town won’t and can’t go anywhere else. An food is the biggest necessity.  Another day for that post.
<< On a note this almost seems ideal.
K.S.