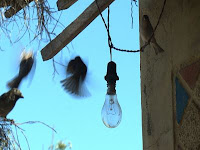 This film brings together a selection of the stories and paintings of the Warlis, and some of the narratives about `them’. To the Warlis, a community of Adivasis (indigenous peoples), who live close to Mumbai, these stories represent their `history’, their world-view. All the outsiders- the Portuguese, the Marathas, the British, the `native’ settlers- tried obliterating this history and wisdom.

This juxtaposition of disparate discourses is an attempt to read between the lines, as the stories themselves do.