The trailer gives a hint of what you can expect.

What do you expect when a Sci-Fi movie, with aliens is mashed up with an out and out Teen movie? This is what you get – I am Number 4!!

I am a book fanatic, I read all sorts of books, with a special attachment to Science Fiction and thrillers. When I heard that “I am number 4” would be releasing, and that, it was based on a book, I borrowed a copy to do some advance reading. Sometimes, you know, I think it’s good to just read a book without knowing much what everyone else thinks.So yes, I read the book because of the upcoming movie. I saw the trailer awhile back and it looked fascinating.But this is not about the book, this is about the movie.

I had high expectations, considering I really enjoyed the book, and I was happily surprised when it actually surpassed them. Alex Pettyfer was great as Number Four, and I think all of the actors portrayed their characters well. With abundant of choices and genre to pick for, I Am Number Four is lucky to become among the first to be released in theaters.

I Am Number Four is the first chapter of a planned franchise which takes a look on the life of John Smith (Alex Pettyfer), an alien from the planet Lorian who seeks refuge on Earth to escape an invading race, the Mogadorians which destroyed his home planet. Been one of the nine children whom were sent down to the Earth, each of the them will grow up, possessing own superpowers, strength and agility. The 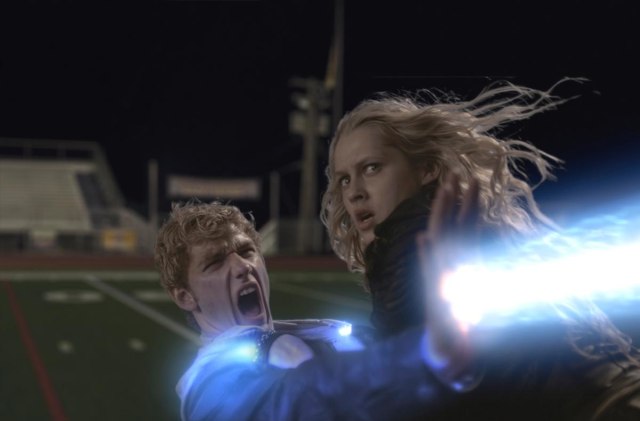 Mogadorians, lead by the Commander (Kevin Durand) arrive on the Earth in a mission to kill all the nine infants. Under some protective charms, the children can only be killed according to the designated order. The bad guys are now here on Earth to find and kill these kids… but they are only able to kill them in order. The first three have been found and killed, and of course, our hero is…. Number Four!

I’m going to be honest: Pettyfer definitely added something to the movie that had nothing to do with actual acting. So maybe I’m a tad more impressed because of that fact, but I still thought it was a great movie. It was filled with action and good dialogue, and I actually cared about the characters. One thing i thought was great was how nicely everything was paced. Nothing really suffered in the transformation from book to movie, except maybe a little bit of explaining. But nothing was totally overlooked, and I was overall, really happy with what scenes were kept in and what scenes were looked over and shortened.

If this were a television series – and from my understanding of the book and its proposed sequels, I think it probably would have – then Sam’s domestic violence subplot would be expanded and not feel like a dramatically neutered afterthought (Roswell’s similar plot line proved to be one of that series’ bigger triumphs) and the central plot wouldn’t feel so rushed.

The movie isn’t particularly deep, but I don’t think anyone went into that theater expecting something deep

really. It also had a few rough scenes; I thought the romance between Agron and Pettyfer seemed a little quick and strained, but they didn’t affect the movie in a strong way. It was intense and suspenseful, and completely lived up to expectations. My favorite part was probably how great the battle/fight scenes looked. Perhaps if all these pretty people weren’t so, well, pretty, I Am Number Four would feel more exciting – or, perhaps, if “number four” was the geeky Sam rather than the gym bunny John – but fans of this sort of material should come away with a minor appreciation for it. I’d recommend this one to anyone looking for a good action-adventure with some, (cough, Alex Pettyfer, cough) great actors in it. I’m looking forward to the sequel (both book and movie).

I Am Number Four is an action / Sci-Fi film, Released in the US on February 18, 2011. The film is directed by D.J. Caruso and the screenplay is written by Alfred Gough based on the book by James Frey, and stars Dianna Agron as Sarah, Timothy Olyphant as Henri, Kevin Durand as Mog Commander, Teresa Palmer as Number Six, Alex Pettyfer as Number Four, Jake Abel as Mark James, Callan McAuliffe as Sam, Beau Mirchoff as Drew, Emily Wickersham as Nicole, Patrick Sebes as Kevin, Monica Ciszczon as Carnival Patron, Cody Johns as Kern, Karina Fernandez as Teen #2, Jeff Hochendoner as Sherriff James, James Werley as Driver and Peter Mozingo as News Cameraman.

Movie synopsis: Nine infant aliens, who closely resemble humans, flee their home planet, Lorien, to hide on Earth. An invading species, the Mogadorians, have destroyed their planet, and follow them to Earth to hunt them down. Each of the nine aliens is given a guardian and will develop superhuman powers as they become adults. They are each assigned a number. These last children of Lorien can only be killed in the sequence of their numbers.

Number Four (Alex Pettyfer), also named John Smith, moves to Paradise, Ohio, disguised as an American high school student. He makes a friend, Sarah (Dianna Agron), a sweet Midwestern girl who is a photographer. After being on the run his whole life, Number Four falls in love and now has something to stand up and fight for.